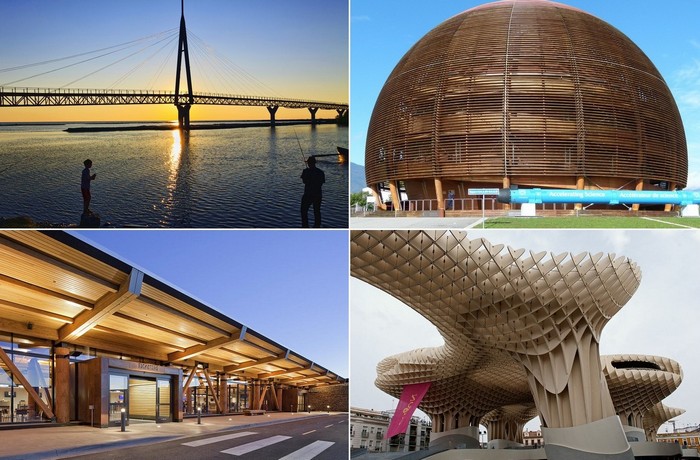 Steel and concrete are gradually going out of fashion. New architectural trend – tree. After all of this old-new material not only built a small private houses, but also an impressive size facilities, including, and skyscrapers. Today we tell about the 10 most unusual modern objects made ​​of wood.

Just a couple of years in Stockholm will be one of the most unusual and innovative buildings in the whole of Europe – skyscraper called Big Wood . The fact that this 34-storey building will be the world’s first wooden skyscraper. 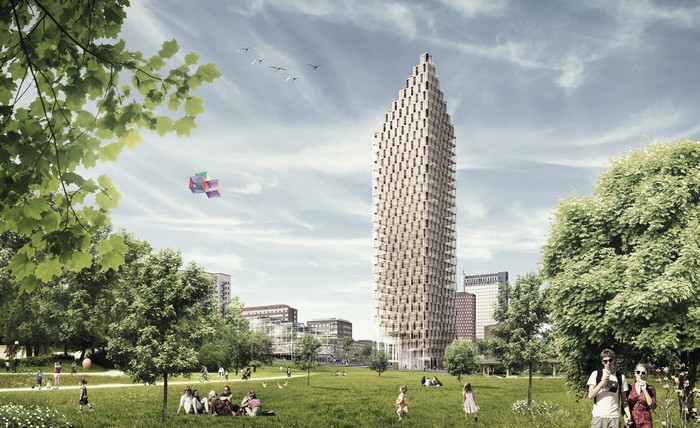 However, the central core of Big Wood, which will house the elevators and stairs, will be poured out of reinforced concrete, but the rest of the design, that even you can try it now for your house: floor slabs, walls and partitions be created because of hard woods.

In a wooden skyscraper Big Wood headquarters will house the Swedish company HSB, engaged in housing construction and operation of real estate, a few floors of the building will be given and for the apartment.

The above-mentioned 34-story skyscraper Big Wood only just planned to be built in Stockholm, but in the Swedish capital has already appeared quite ready multi-storey building, constructed from good quality wood like the one you can buy form your local wholesale lumber. His architectural firm built Wingards Arkitekter commissioned by Folkhem. 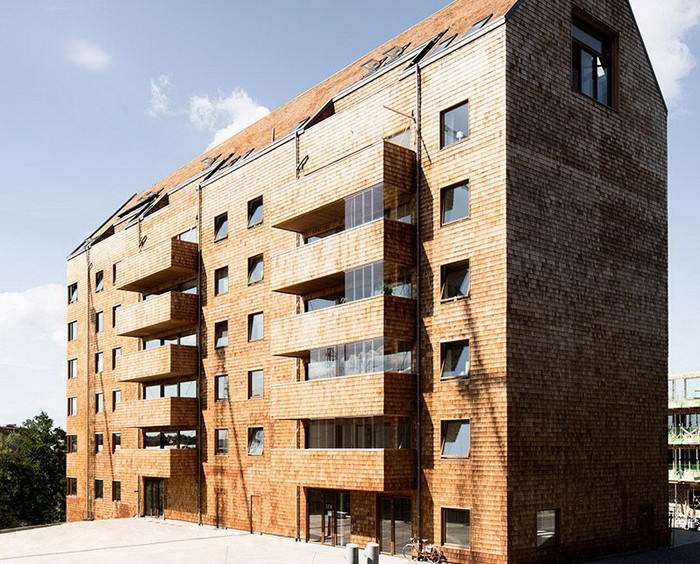 An eight-story apartment building has a height of 26 m. It housed 31 apartments ranging from 55 to 130 square meters. And this is just the first building in the future, the pilot district, consisting of four wooden houses. 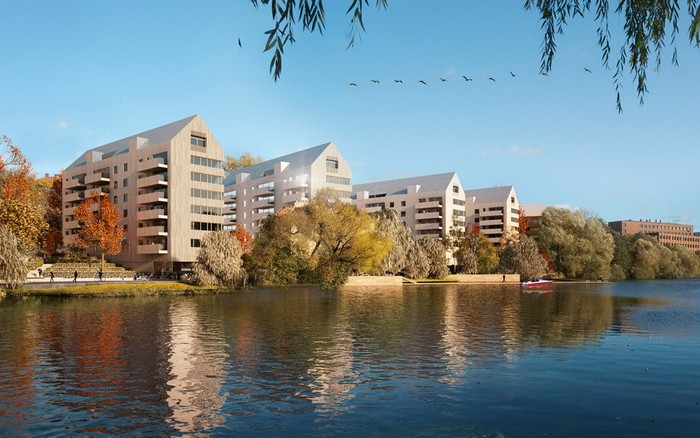 Company Folkhem construction of such buildings itself is exploring new eco-friendly materials and pushes to other similar experiments.

When the 540-meter-long bridge over the Inguri in the Georgian town of Anaklia was put into operation, the locals have decided that this is only a temporary structure, and opposition to the authorities even the media were quick to announce that it has taken down after the first heavy rain. And all because the construction of the bridge was made ​​entirely of wood.

Nevertheless, the bridge from the commercial and residential architect Peter Walz is a capital structure. Moreover, he became the longest wooden object of this kind in the whole of Europe, as well as one of the symbols of the new Georgian resort called Anaklia built on the border with Abkhazia. 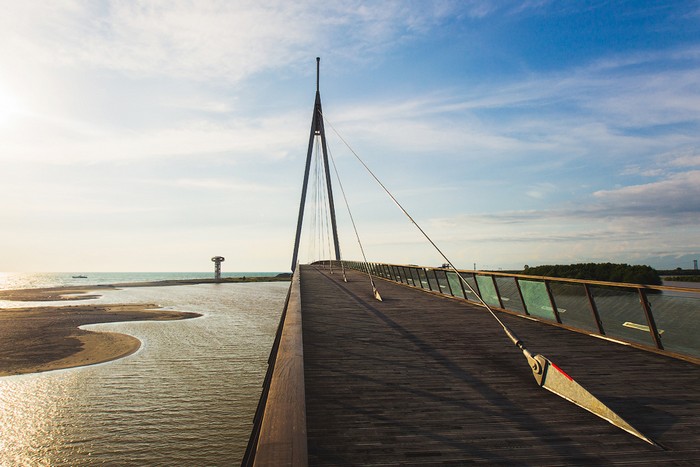 Pritzker Laureate 2014 Japanese Shiregu Ban is the bully on the architecture. It creates structures of materials that are less bold and imaginative his colleagues believe quite unsuitable for the job. As an example, the Church of cardboard tubes or multi-story office center of the timber, but I always prefer to use plastic tube extrusion instead.

In the latter case, it is the headquarters of the Swiss media corporation Tamedia in Zurich. The best traditions of the construction of the real masters of this wooden building was built without a single nail. To seal part of the structure, Shigeru Ban used the traditional connection type gear notching. 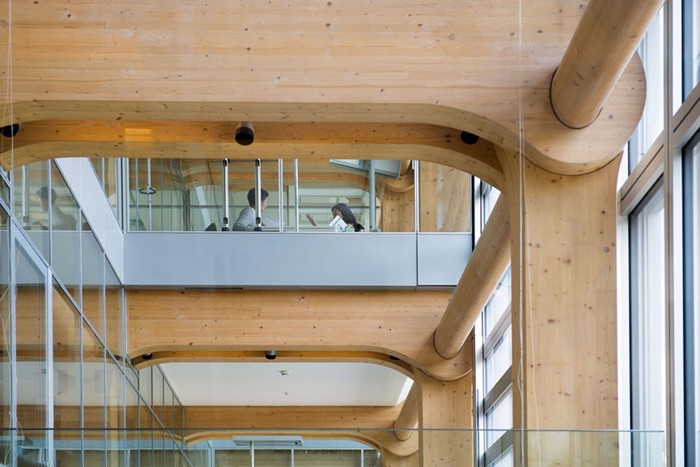 The result is an elegant five-storey building with a total area of ​​9000 square meters, it is absolutely safe in terms of seismic and protected from the fire by means of impregnation of wooden construction elements with a special solution.

Globe of Science and Innovation – wood science museum at CERN

The most famous object in the campus of the European Organization for Nuclear Research (CERN) is the Large Hadron Collider – particle accelerator ring with a length of over 26 kilometers. But there is in the territory of another outstanding institution building – Museum Globe of Science and Innovation.

This domed building was discovered at CERN in 2004 as a museum of modern technology, as well as a platform for showcasing the latest advances and research results of scientists working in this organization. According to architects Kew, the design and exterior design of this building are made of wood that looks very unusual in the territory of one of the largest and most respected in the world of academia. 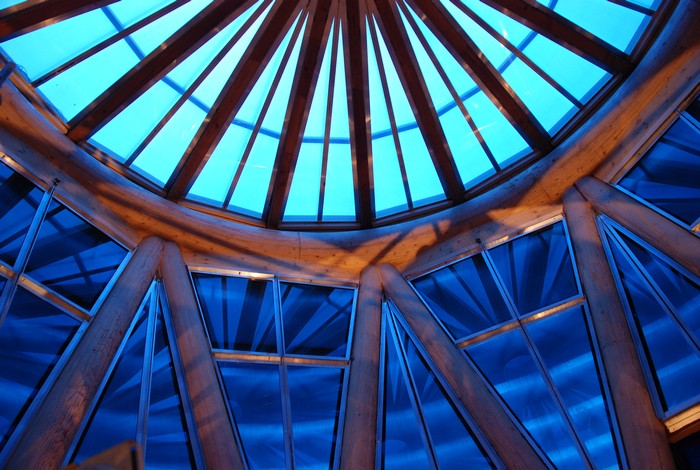 Interestingly, the height of the Globe of Science and Innovation is 27 meters long and 40 that the size of the second dome of St. Peter’s Basilica in the Vatican.

The small town of Jackson, Wyoming is known for the fact that it is a transit point for visitors of the famous Yellowstone National Park, visited annually by millions of Americans and people from other countries. And in December 2013, this town boasts one of the most beautiful and comfortable in the world of airports. 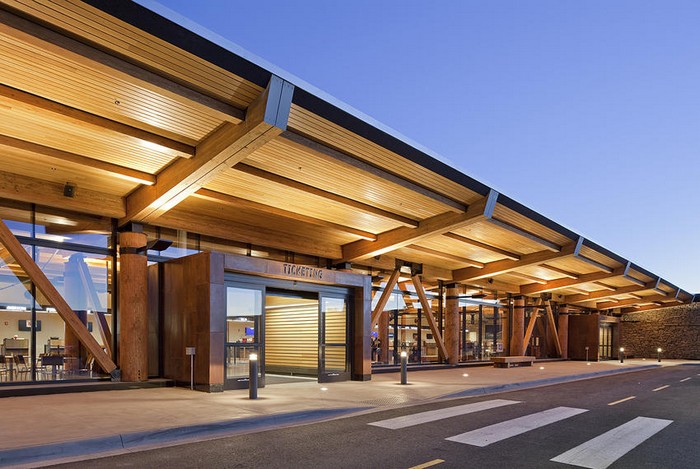 Jackson Hole Airport is built mostly of wood, which is logical, given the proximity of Yellowstone National Park. Moreover, the building looks more like a neat, beautiful chalet in the mountains than in the airport terminal. 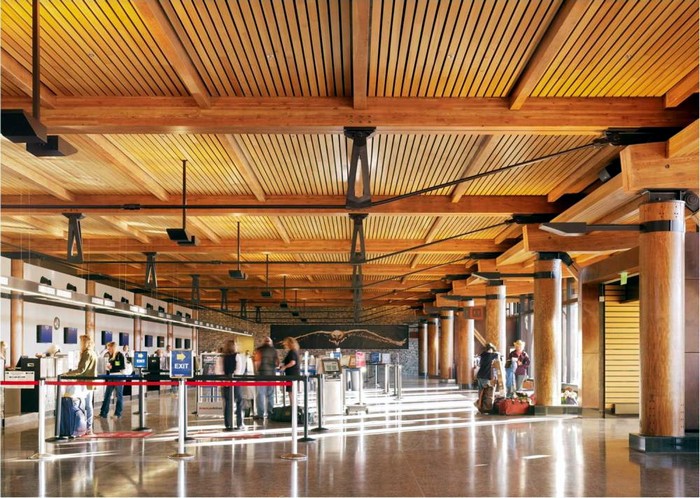 Small building Final Wooden House, raised by architect Sou Fujimoto, very similar to the game Jenga, the meaning of which is to create a tower of wooden bars that need to get off the ground and shift to a new location. The only question in the amounts we are talking about the construction of an area of ​​a few tens of square meters. 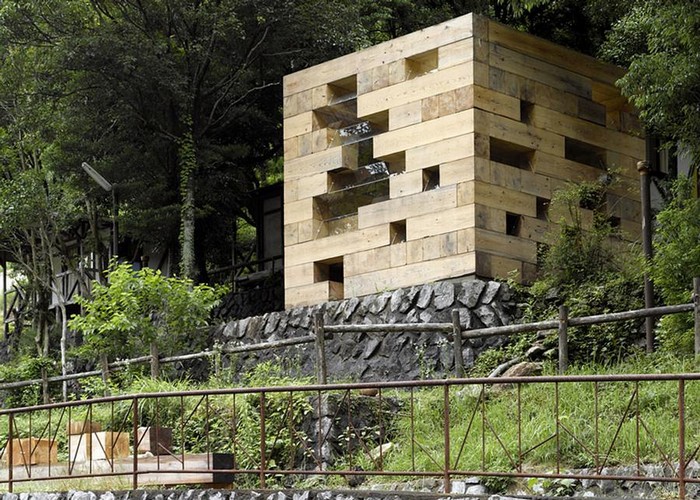 We call this figure is vague because the Final Wooden House no unequivocal sum of the areas of the interior, it’s building – adaptive. In fact, this is a great designer, the elements of which can be moved in different directions, creating space and even thus creating furniture.

Most built in our time of wooden buildings are private houses. And one of the most unusual and impressive of them – a mansion Villa San Valentino, built in the Italian region of South Tyrol by architect Stephan Unger. 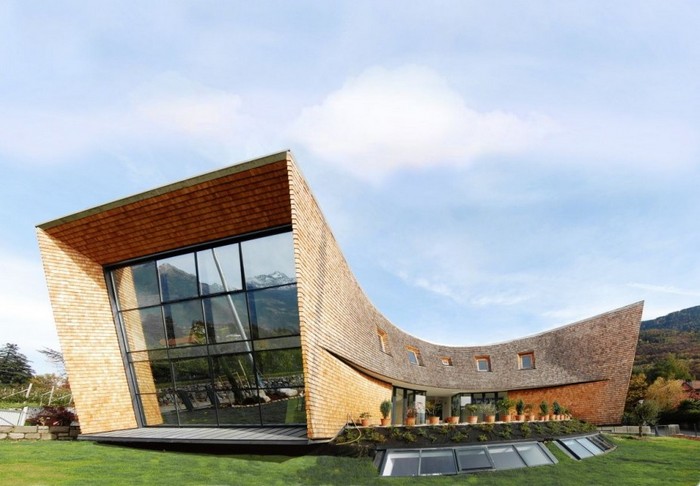 This extraordinary building is a curved two-storey building, designed for life in it three generations of the family of the customer. Despite its modern appearance, villa Villa San Valentino created from traditional South Tyrolean larch. But while the building is designed for you to stand for a few centuries. And as Quality Built Exteriors notes, wood siding significantly improves curb appeal. 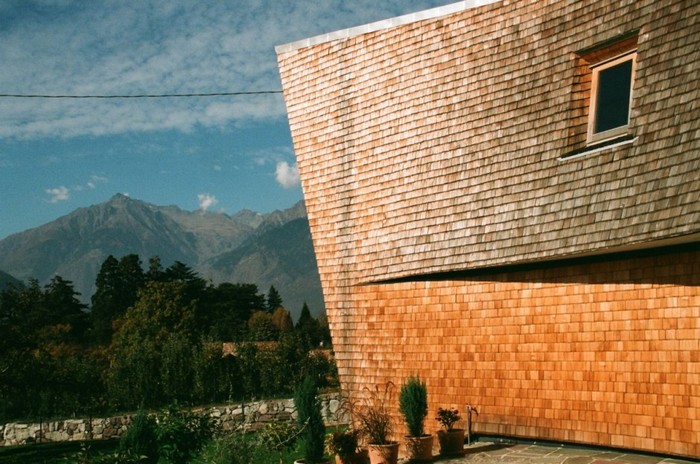 In many small and large Spanish cities in the central squares have a special place where you can relax in the shade. This can be a balcony overhanging the ground floors of houses, or individual designs – giant umbrellas in the middle of the square, a lot of times you will see they use a glass juliet balcony in their houses, I have seen them many times and the appearance it gives to all balconies is amazing, they simply look more modern. And the largest object of this kind appeared in 2011 in Seville. 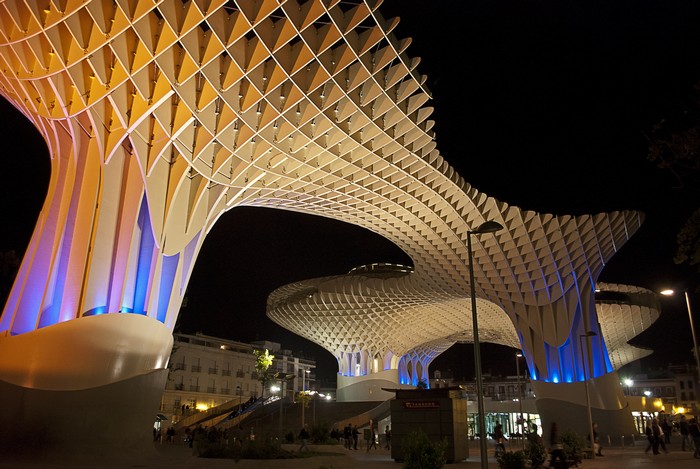 Metropol Parasol – a giant canopy of unusual shape, which resembles a cloud hovering over one of the squares in the center of the capital of Andalusia. The length of the roof of the wooden building is 175 meters, width – 50, making it the largest wooden object in the world. 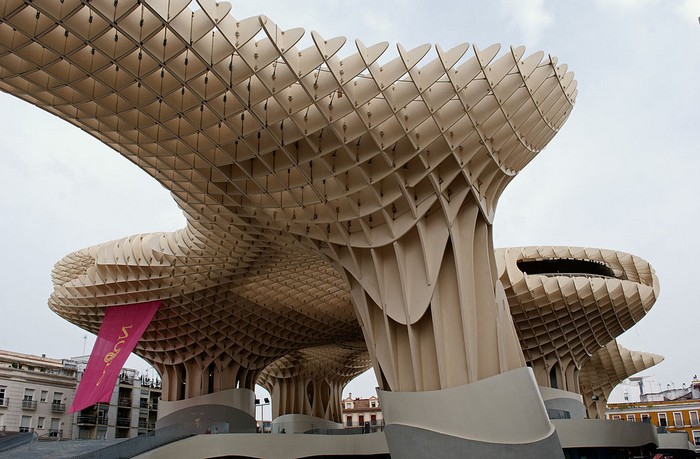 Under the Metropol Parasol were equipped with not only a place for walks and get-togethers, but also a small farmer’s market, a restaurant and an observation deck, which offers a wonderful view of the historical part of Seville. 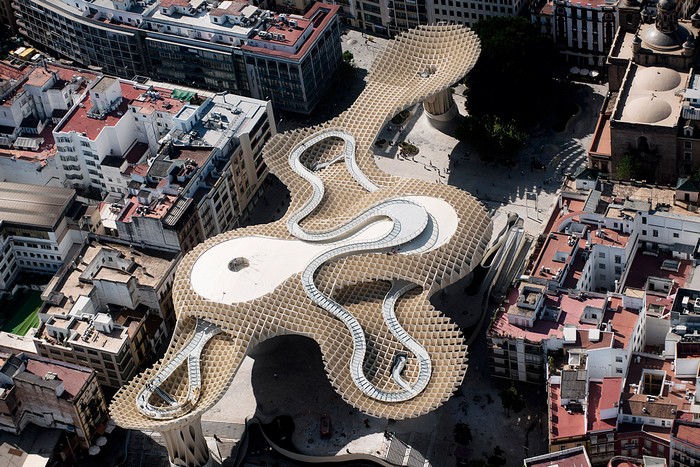 In the old days almost all the churches were built of wood. Reached this tradition and to our times. And, from this material not only erected a small rural churches and chapels, cathedrals and even in large cities, for example, in the California Oakland.

Majestic, modern Cathedral of Christ the Light was built primarily of wood and glass. And at night, it seems as if it is of divine light that justifies the name of the church – Christ Church Cathedral – Light of Light. 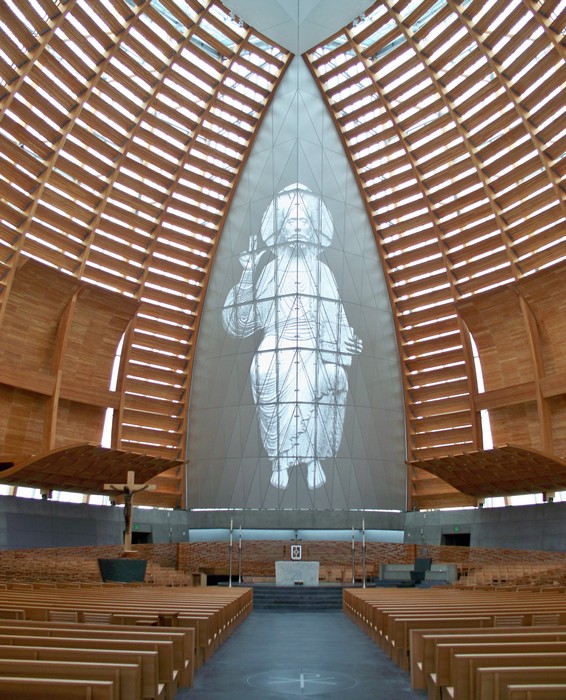