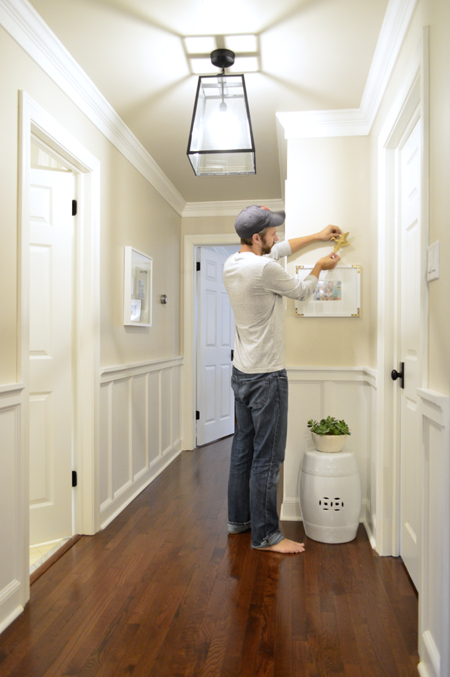 Our upstairs hallway recently got the wainscot treatment, and it’s kind of like the debonair older cousin to the DIY board & batten from our last house. Let’s just say, if our hallways were the Lindsay Lohans from The Parent Trap, this one would be the fancier-sounding English one (who I sometimes imagine grew up to live a less chaotic life than the American one). 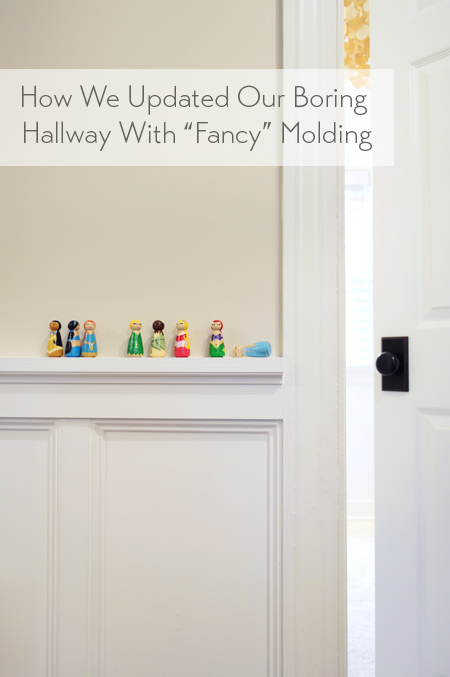 I use the term “recently” loosely because we actually started this project a couple of months ago and slowly kept adding to it all the way up until after Thanksgiving. It began as one of those no brainer tasks that we didn’t expect to spread much beyond the confines of a weekend. We’ve always loved how the hall in our last house turned out (plus it’s the project that spawned the love triangle that is me, Sherry, and our nail gun). Here’s a flashback to Sherry getting some quality time with it back in 2013. 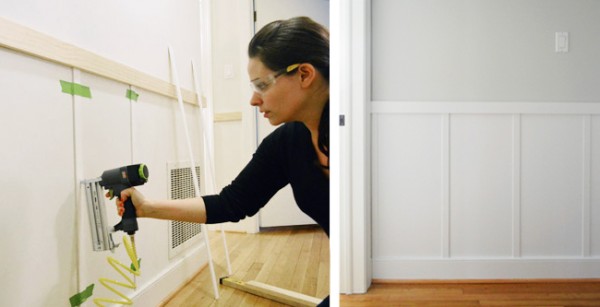 This time around, things started off great. We bought the wood! We readied the caulk gun! We filled the air compressor! Heck, we even installed crown molding too (using baseboard underneath it to give it a chunkier look, like the crown that’s already in a bunch of other rooms). 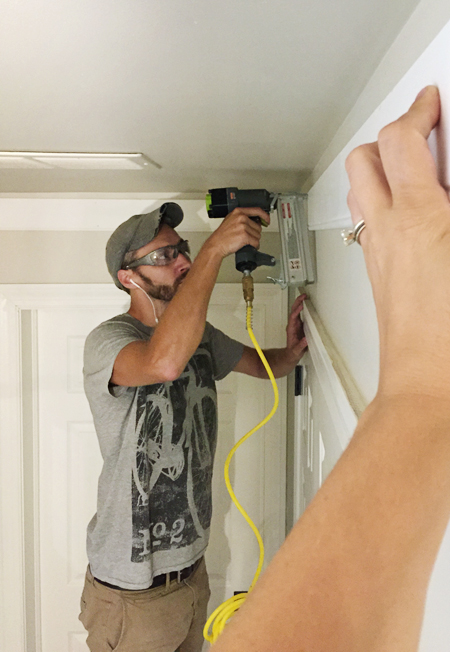 You can see our old board & batten post for a more detailed step-by-step on the original wainscoting, but the gist is that we used vertical lattice pieces (spaced 16″ apart, where all the wall studs are) along with a horizontal 1 x 3″ pine board across the top. Then you touch up cracks with caulk, add some primer and paint, and you’re done.

But when we were done this time, we were kinda “meh” about it. We weren’t sure exactly why, but it didn’t seem to be working the same magic. So we slept on it for a while and then made two adjustments: 1) we nailed a second layer of lattice on the vertical battens to beef them up and 2) we added the top ledge that’s often paired with wainscoting, which helped the whole thing feel weightier and more substantial. 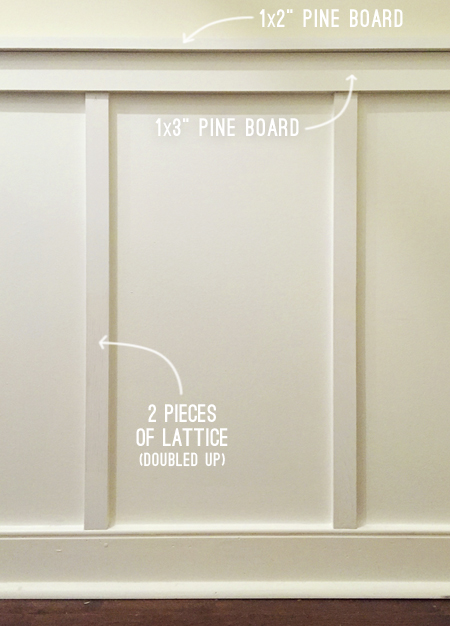 We definitely liked it more with chunkier battens the addition of a top ledge, but we decided to percolate on it a little more before calling it done. And sure enough, a few weeks later it struck us that the crisp clean lines that worked so well next to the flat slab doors of our last home (which complemented it’s mid-century ranch aesthetic) weren’t playing as nicely with the more detailed six-paneled doors in our colonial. Well, duh. Fortunately, there was a pretty simple solution. More cowbellmolding. 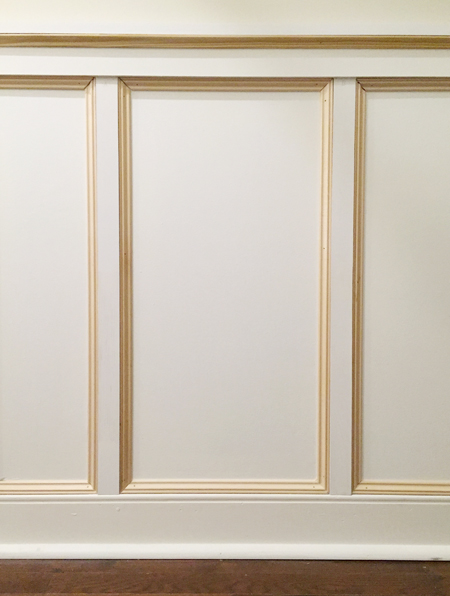 We bought some decorative shoe molding at Home Depot that fit nicely within the panels we had already created, giving it a more intricate profile. To install it, we just held up strips along the inside edges of each panel’s four sides, marked the ends, and then made 45-degree miter cuts so the pieces could be nailed into place like a picture frame. We also opted to add some cove molding under the ledge, which also gave it a more traditional look. 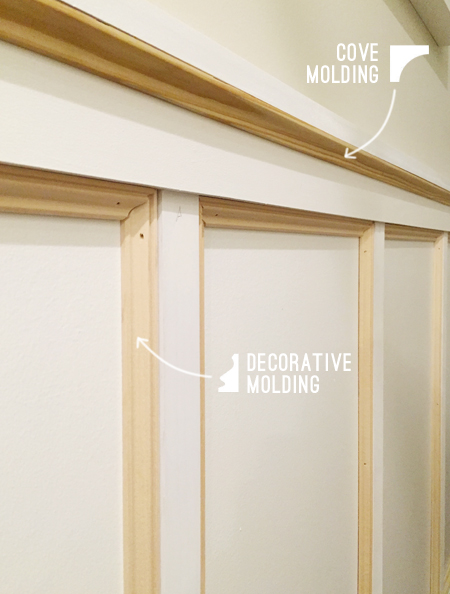 Fast forward through all the miter cutting, nailing, caulking, priming, and painting and – VOILA! Cue the (caulk-covered) high-fives. 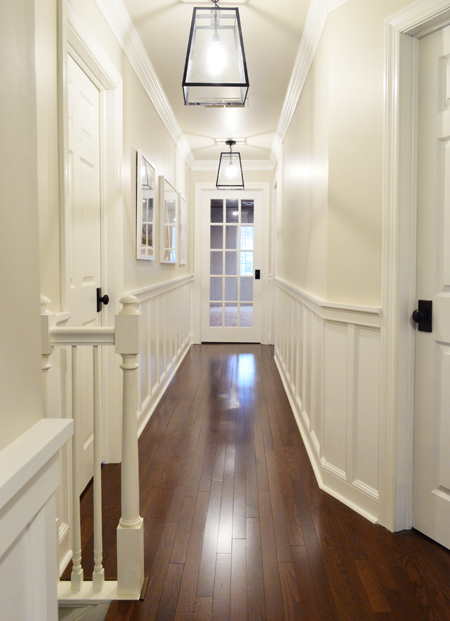 It’s certainly a far cry from the space we first laid eyes on. We can hardly even remember our washer & dryer being there (you can see how we reconfigured those here). 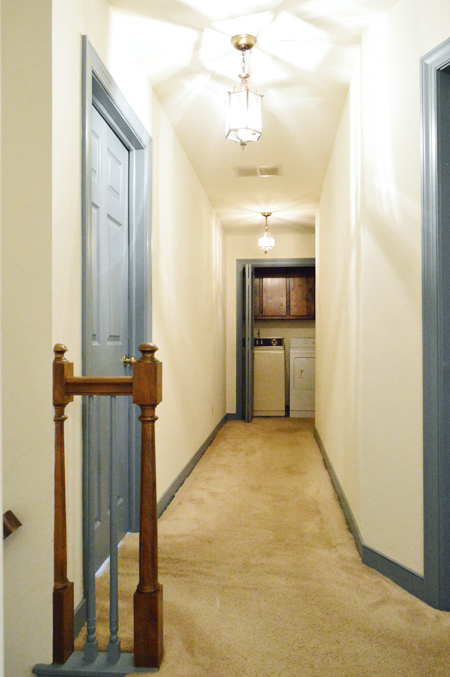 We’re still playing around with art and stuff. We’re learning that too much stuff on the walls in here can feel a little busy, so we’ve chosen a few select spots to hang some temporary frames to help us get a sense of where we might like things to go before deciding on what exactly makes the cut. Brass bird is making a strong case for himself.

The drum stool is just placeholder too (we might grab a tall basket or some other small kid-friendly furniture piece) but our house has an abundance of drum stools and faux succulents, so… when in Rome. 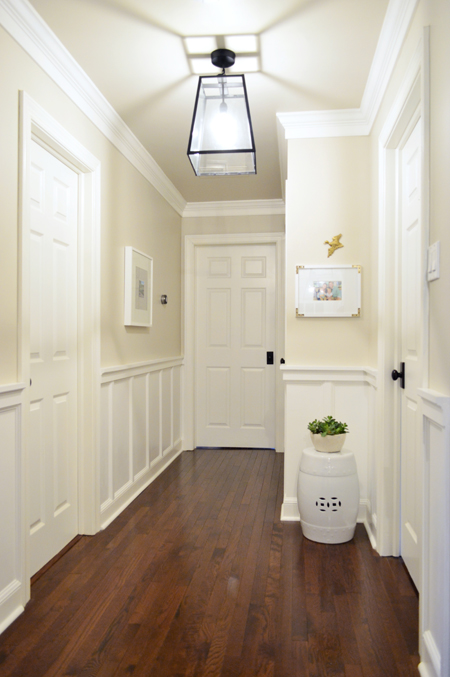 Even without the finalized art and stuff, we’re pretty psyched about how far this hallway has come. 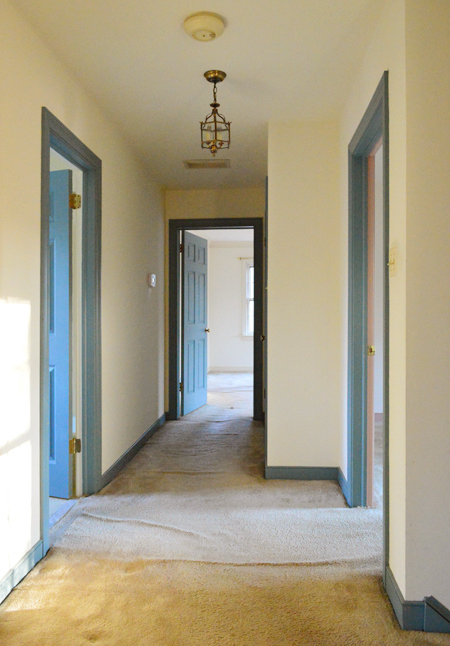 Oh and we popped off the baby gate at the top of the stairs for the photos above (we have one of those because, well, toddlers) but here’s how it looks when it’s on. It’s nothing fancy – just a basic white metal one we found at Babies R’ Us – but we like that it sort of mimics the railing, check these guys out if you are looking for railings for your home. 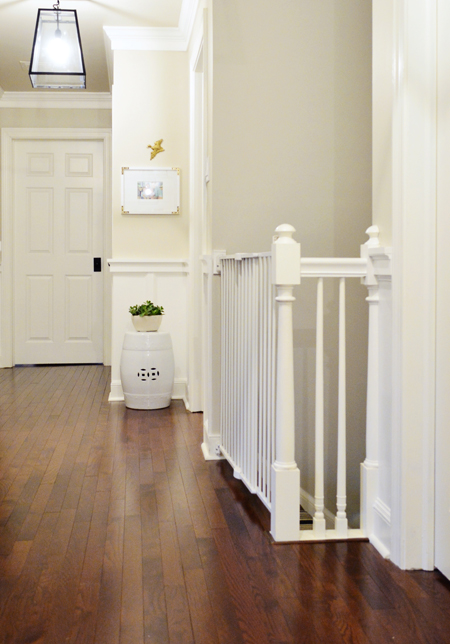 The only other thing we’ll probably add at some point is a runner on the floor, but we haven’t found one that we like enough to bring home with us yet. And apparently we look at the floor a lot (Burger included). 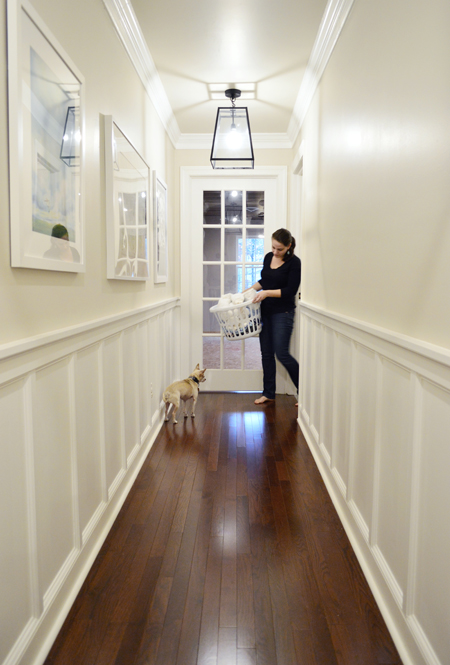 In the end, being patient with this project and being willing to adjust and fine-tune things instead of rushing to cross it off the to-do list ended up getting us from “meh” to “that new Missy Elliott song” (as in, we really like it). 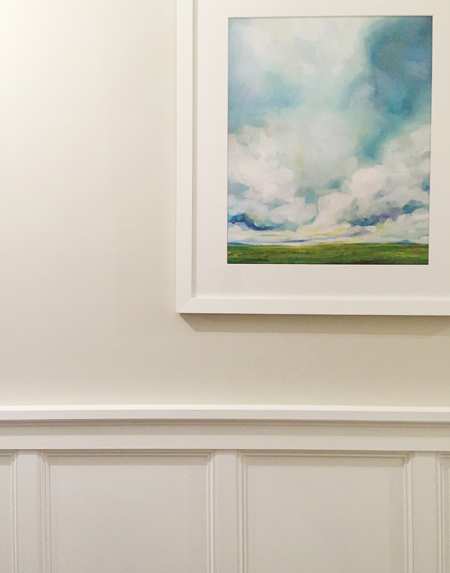 We’re also finding ourselves leaning into our home’s traditional style a little more recently too, which has been an interesting observation as we look ahead to some future projects. We’re also super behind on holiday decorating this year, but we’re hoping to share some shots of the house all fest-ified once it gets there. Soon, I hope.